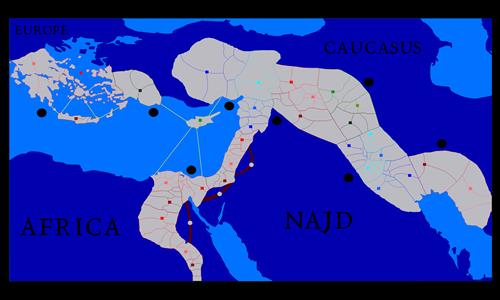 This is a Map of the Middle east ca. 1400 BC, depicting several Ancient civilizations.

The reason some territories are inexplicably larger than other similar ones for no apparent reason is because I based the territories around cities, using a city and the land surrounding it as a territory. In some places, there just seemd to be more cities. One strange looking place is egypt, which has a whole bunch of territories, and My only guess as to why is that Egypt is much older than any other empire depicted and had mroe time to build some cities.

on 6/12/2020.
the map has some not usable areas. specially the big one in the middle ("Najd") makes it strange to play.
for certain scenarios it might be great.
0 out of 0 people found this review helpful.
Review by captainlove on 8/7/2020.
1 star. If it wasn't for the fact that you have the game under control at turn 10, but it takes 20+ more turns to end it, I'd probably give it a 2 star rating. No strategy involved, just go full speed ahead and it's over. A few shortcuts that didn't have 1000 armies on them would make it better.
0 out of 0 people found this review helpful.