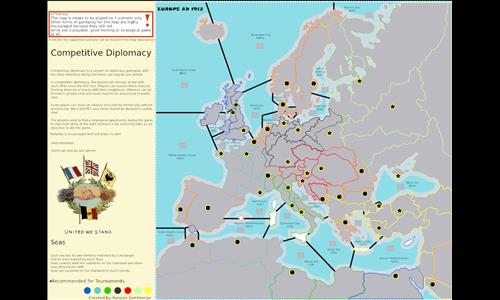 Current tournament (feel free to participate) - for invite, pm those guys who're in it:
https://www.warlight.net/MultiPlayer/Tournament?ID=17306

Map is based on the boardgame diplomacy but with some names and territorial changes. The year is also set to 1912.

Distributions have yet to be added. This is probably the megawillionth Europe map around.

Zephyrum on 11/16/2015.
This map is quite fun. The idea of a diplo-ffa mix itself is interesting but not fully innovating (this is the first map to fully aim that though). The big flaws are:

1: You cannot use this on tournaments. Tournaments only allow 2-team battles, meaning 1v1, 2v2, 3v3 and so on. Not FFAs. So the map has failed it's purpose.

2: Trust me, of all slots, you DON'T want to be Austria-Hungary. Seriously. You're in the center of the cluster f*ck, bordering 4 countries - all others border only 3. In addition, your income is among the lowest for all the heat you're taking, so you're just completely prune to be everyone else's ragdoll and be killed early on (I talk from experience).

3: Not as vital, having some territories have a value of 0 for not being in any bonuses is quite bad, you might want to add some value to them or at least make the superbonuses worth something. A player can be in a single territory at 0 income and no troops, completely locked out of the game. Once again, I speak from experience.

Belgian Gentleman on 11/16/2015
Thank you :)
Very constructive review but there are some things I have to clear you up.

1) An unusual misconception ; Tournaments are not limited to team games only. A tournament can be created with FFA settings as well and each game of a single-round robin tournament can be able to hold at maximum 40 players. Not sure where you got that one from but whatever.

2) Diplomacy is the key. In a game you've to mail your opponents to bring peace to a war. If you don't maintain diplomatic relations you have a high risk of your empire fainting. You've played with old settings in my test game. The new settings which were altered use a base income of 1 army.

3) Everyone is at war with each other since the first turn. Wouldn't that make the superbonusses obsolete if the borders constantly change? Also this map has no bonusses set to minor territories because that wouldn't make much sense because the map serves to be strategical and tiny and is based on the diplomacy boardgame where the same income gameplay is used.
2 out of 2 people found this review helpful.
Review by

Nikitan on 6/11/2020.
5/5. This is a map based off the original map for the Diplomacy game. Great use of bonuses and sea territories. I would've made one myself if I didn't see this map in time :)

And what Zephyrum meant by Superbonuses, I think that you should add superbonuses of worth 0, to make them nor worth any armies but useful for custom scenario editors or maybe actual diplo makers on this map.
1 out of 1 person found this review helpful.