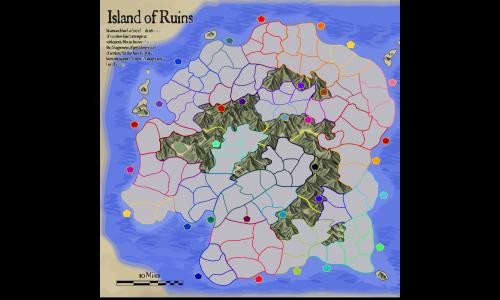 Basically, an island with ruins.

2 - Southeastern camp fest. The southeastern area of the map can be held by controlling only three territories. I recommend a cross-mountain link between Castle in the Mountains and Landlord Jayko's Mansion (or any of the nearby territories) to alleviate the buildup possible there.
Response by map creator

1 - The bonus imbalance is something I did on purpose. I dislike the idea of standardized bonuses, so I created bonuses with different ratios. What you say is true: a good bonus (in terms of territory/income-ratio) will have some less valuable bonuses close to it.

2 - This is true; even though the southeastern corner is not worth a great amount of income, it can be turned into a stronghold. I'll add the suggested connection as soon as possible.