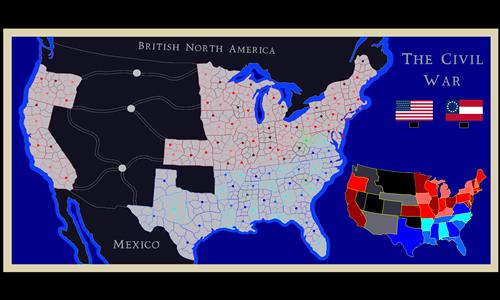 Alright, this is my map of the USA during the 1860's when we had a big civil war.

I called it "The Civil War" on the actual map itself not because I'm ignorant of the fact that basically every country has had one or more civil wars, but because that's what it's taught as in the United States, where I live. I felt it was appropriate since I named the map "US Civil War".

If you're from the south like I am, you'll notice that blue is a yankee color, so wtf is up with me making the CSA blue on this map? Well yes, blue is a yankee color, but this is a moslty political map, as it was a moslty political war, so I decided it would be appropriate to color the countries based on the parties that were running them. Democrats were mostly runnig things in the south, so That's Blue, and up north there were mostly republicans, so it's colored red.

on 1/5/2016.
Great map!
California and Oregon seem a little bit isolated, otherwise, good job!
I like how you did the superbonuses.
Response by map creator

Imperator on 1/5/2016
Thanks for the feedback. The superbonus model is actually one I've been experimenting with for a while, and I've been implementing it into all of my new maps, so it's nice to get some feedback on it :)
6 out of 7 people found this review helpful.
Review by Nathan

on 1/6/2016.
Great map! The west, Texas and Florida are a bit isolated, however. I recommend adding the following connections:

- A link between Texas and Kansas across the Oklahoma Panhandle

Imperator on 1/19/2016
Thanks. I'll definitely add some or all of these when I do an update :)
6 out of 7 people found this review helpful.
Review by j willy 47 on 1/5/2016.
Really like this map, the superbonuses were done very well. The first time I played I thought Texas and California were connected, but once I figured out that it was just the Mexican border everything went fine. Great Job!
Response by map creator

Imperator on 1/6/2016
I may either change the stroke color on the roads, or add a fill to them to distinguish them from the actually country borders. The only reason it's done the way it is is because I thought that it looked best that way, but the confusion about the country borders vs roads isn't something I had thought of!
4 out of 5 people found this review helpful.
Review by Hai Guise Wahts Uhp? on 1/20/2016.
Overall great map! I agree with the previously suggested link between Texas and Kansas. Also, I was just noticing some things about my home state of Michigan:

1: Our county is actually spelled Oceana, instead of Oceania. We're weird that way.

2: On second thought, this is fine within the limitations of the map, but feels weird to have Washtenaw (and Jackson) extend so far north. IRL, Washtenaw is way farther south than St. Clair or Bay county, and is just north of Monroe, but things can't be too accurate on a map like this without unbalancing the game, so I say its fine as is.

Overall, nice map, I really enjoyed it!
2 out of 3 people found this review helpful.
Review by

FrankSoDank on 2/8/2016.
Such a fun map that can easily go either way. Really looking forward to historical maps as enjoyable as this. Thanks!
1 out of 1 person found this review helpful.
Review by rk725 on 5/29/2016.
It's possible to fit the entire map on a screen and still make the game sort of playable. That's good.
0 out of 0 people found this review helpful.
Review by

on 1/21/2016.
The railroads were a good idea. There may be room for improvement with the bonus structure.
0 out of 2 people found this review helpful.