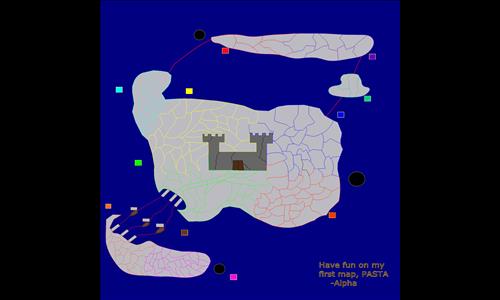 People in America got tired of a bunch of stupid laws and crap, so they settled their own country on an island in between America and Canada where they could setup an Oligarchy to run P.A.S.T.A. and live as they pleased. 20 years later in (2145 A.C.) all the nations of the world attacked P.A.S.T.A and destroyed the precious country of P.A.S.T.A. It's ruins still remain to this day.

Review by Andalorium on 1/4/2017.
First off well, done on making a map, personally I choose not to make them because I'm a perfectionist in some things and would probably never post it. Second I hope that you take my input as an opportunity improve on this and future maps, and not as an attack on you. So connections always double check, and have someone else do it too, because of bias almost always you'll miss one, i.e. Mirkwood and Orange Farm are right next to each other but do not connect. Balance good maps, have balance or flow with the bonuses etc, but currently this one is unbalanced with four of the bonus areas small enough to get early on and the rest take several turns to get with not enough compensation unit wise, breaking some of your larger bonuses up could help. It was cool that you have back story, though I'm wondering what each initial stands for, and at that you could have named the separate islands though to add more flare to your story. On the note of stories you could have had unit placement scenarios to add something
3 out of 3 people found this review helpful.
Review by Nathan

on 1/13/2017.
The islands are too isolated and disrupt any balance in the board. The number of territories per bonus is so large that it makes capturing and hold bonuses very difficult. Ditto the actual armies awarded for each bonus.
0 out of 0 people found this review helpful.
Review by

on 8/19/2017.
divide up the bonuses more and make their values (#of territores - 1) as a start while you learn better game balance.
0 out of 0 people found this review helpful.