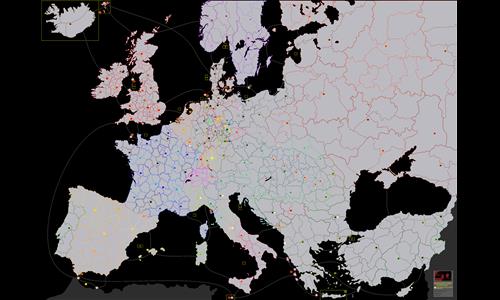 Europe in 1815, in the aftermath of the Napoleonic Wars. It should be noted that bonuses are based on their real-life value as a region, rather than the amount of territories they contain.

Zephyrum on 3/3/2016.
Being fully honest, this map is pretty flawed compared to your other ones. When I saw a new map with your name under it, I got pretty much instantly hyped, and I'm disappointed, sorta. The territories' general shape get really weird, particularly in Germany - not really your fault as that is how the divisions actually were, but still hard to play and sort of annoying.

The bonuses based on value rather than territory count is an interesting concept that was badly played here due to bonuses being of inconsistent sizes and being generally unplayable strategically and the map having little to no appeal for diplomacy players like your past ones.

What I did like was just how goddamn accurate it is. I looked up a map, and it's about as loyal to it as possible.
Response by map creator

on 3/3/2016
Yeah, I've made a lot of "balanced " ones in the past, so I thought I'd just make one more in tune with reality, because that's what some players like. It's not for everyone, I know.
8 out of 8 people found this review helpful.
Review by Nathan

on 3/8/2016.
I really enjoyed playing on this map. There are enough vanilla Europe maps that I like seeing one with imbalanced bonuses based on, presumably, a semblance of historical value. (That being said, we can quibble about the relative bonus values of certain territories, e.g., I can't imagine Iceland being twice as valuable on a per territory basis as western Turkey, but that's the magic of the bonus alteration feature!)

The maker has dealt well with the odd shapes and discontinuous nature of many territories, especially in German-speaking areas.

On an aesthetic note, there is probably no need for the inset box around Malta - it appears to be in roughly the right place, as opposed to Crete, where use of the inset box makes sense. Of course, expanding the map just slightly to the south would eliminate that issue. If you do expand to the south, be sure to leave a margin so that tooltips are easily visible at all times.
7 out of 7 people found this review helpful.
Review by