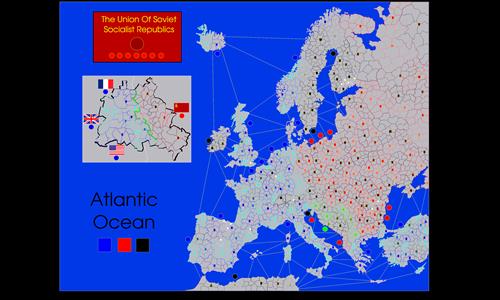 This is a re-realease of my previous Iron Curtain map, the difference being that I have included the USSR. I decided it wouldn't be appropriate to release it as an update to my previous map, since the gameplay is very different with the 350 or so added territories.

on 8/27/2015.
Very nice map. Adding the USSR makes complete sense. At first, I didn't like the greater-than-usual number of overseas connection, but now I think it really speeds up gameplay. I noticed a couple of broken links. I apologize that I did not keep track of them, but I believe there were two in the Balkans and one in Finland.

Food for thought - since this map depicts the Iron Curtain nations, why not create more barriers to obstruct travel between east and west the way you do in Berlin, but between nations themselves? You could break the connections between Warsaw Pact and NATO countries and allow for access only through controlled checkpoints and/or neutral nations.
Response by map creator