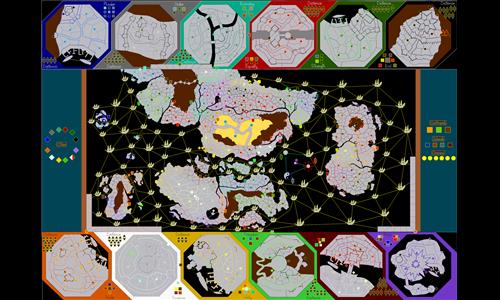 A very big, lore filled map, with tons of chokepoints. Intended for Diplomacy style games. Quite complicated, but well worth it.

IMPORTANT NOTES: Hosts / Anybody you play this map with should be familiar with city zoom maps, as they define the map basicaly. Cities that are zoomed in are represented with OCTAGONS. It is heavily advised that you include ABANDON/BLOCKADE cards, as there are a lot of negative bonuses you might accidentaly take and wish to get rid of.

My first map, this large world revolves around 12 superpower cities, each with defenses and economies that give them units for holding the surrounding lands and make them harder to besiege.

Many concepts in this map are experimental, and many of the territory names do tribute to various other works I admire.

Thanks to the Warlight community, especially E Masterpierround and Fenway for helping me test and design.

I HAVE BEEN HYPED FOR THIS SINCE IT SHOWED UP ON FORUMS! NIOBIUM, YOU ARE A GODDAMN GENIUS! 5/5 INSTANT FAVORITE! Going to be making a diplo on this RIGHT NOW!!! :DDD

On the test game the jungle mechanics was better, but sadly Fizzer was being douchy, oh well. Either way, this map was PERFECT to play during tests. The map seems to have an aura whispering to you "ROLEPLAY... ROLEPLAY...", it's appearance is the unquestionable #1 in my list. Cities mechanics make it very fun to play even on Local Deployment. Bonuses are very good. Defensive bonuses on the cities to make sieging difficult is an amazing, genius, god tier idea. Moving around cities is confusing at first but you get the hang of it after a few turns. The very udea if thus map is amazing, the map is amazing, the inner city maps are amazing, everything is amazing and this is the very definition of map pornography for me - I got an orgasm looking at the screen. I am not exaggerating, trust me. 5/5 favorite.
Response by map creator

Niobium2 on 11/23/2015
Wow! Glad you liked it, definitely designed around roleplay. :)
18 out of 19 people found this review helpful.
Review by {W.U} Francisco Corral on 11/23/2015.
First time reviewing a map.
First off, visually it is beautiful, though huge fantasy maps tend to be confusing this is not the case here.
The negative bonuses put into place to make a siege harder is great, it makes you think your war tactics over and over again since you need to weaken your enemy by taking his lands outside the city before trying to break into it.
Although there is no official lore to the world this acts more as a strength than weakness since it gives the game makers the ability to create very in depth scenarios and it gives the players liberty to use their imagination and creativity.

Overall I give this map 5 tacos out of 5 tacos. Well done.
Response by map creator

I don't like, that the attacker can use the negative bonusses against the defender... the positve wall bonusses should be connected to the throne, not to the streets or the next tower.

But interesting. 4/5
Response by map creator

Niobium2 on 12/7/2015
Yeah, I recognize this map is doesn't work too well for some styles. In terms of strategy in some areas it can be unbalanced... but that lends more to the role play side.
6 out of 6 people found this review helpful.
Review by Nathan

on 1/28/2016.
I've always been a fan of massive maps and this one is no different. Not only is it intricate and huge, but it incorporates negative bonuses to a far greater extent than any other large map I can recall.

That being said, the negative bonuses are very imbalanced. Just to attack the Magic city, for example, you have to suffer a 140-army penalty before you can even enter. On the other hand, you can attack the city of Plunder by ship and not suffer any penalty at all.

Making matters worse is the varying number of entrances to the cities. Only one each territory borders the cities of Magic and Evil, while Science abuts a total of six territories!

These disadvantages need to be evened out to begin to provide each city an equal chance of winning the game.
6 out of 6 people found this review helpful.
Review by

psykkoman on 1/4/2016.
Fascinating map. Intriguing, demanding, captivating. Includes many features which are unique and bring WL play to a completely new level. Great both for diplos and large FFA's. I felt in love with this in an instant and I am sure that I am about to spend tons of hours here. Thank you!
4 out of 5 people found this review helpful.
Review by warhawk on 3/30/2016.
Complex map, I've just got a win on it but I have no idea how I got there. Connecting point into /out of the cities are hard to find and easy to overlook. I loved it, got to play it again.
3 out of 3 people found this review helpful.
Review by

❤HankyPinky on 5/2/2016.
Very well done. I love how each port has a little circle where all the incoming lines hit so it's very easy to see. Also love the names of the territories. Find it hard to believe it's fictional, it named so well it feels like real places. Played it a few times and have yet to find any missing connections. all the fortification/negative bonuses are ingenious.

Annales on 12/20/2016.
Well balanced map (for 12 players) with attention to detail and a storyline for those who wish to play one.
We played one of our most epic games on it and I must applaud its creator! Thanks for making this gem!
1 out of 1 person found this review helpful.
Review by

on 11/27/2015.
too bad overview about bonuses and maluses.
otherwise would certainly be interesting.
0 out of 14 people found this review helpful.