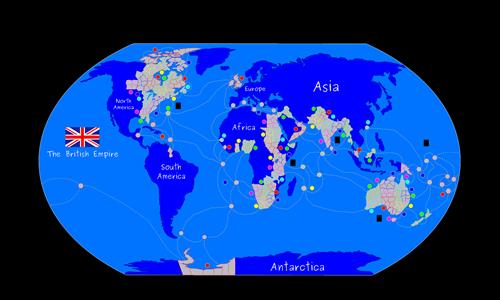 A map of the Former British Empire, The Largest empire in Human history.


This map is quite anachronous, with Most of it being set in 1919, while north america is set somewhere in the 18th century, when britain controlled the thirteen colonies. While this unfortunately makes the map historically inaccurate, I feel that is necessary to fill in the gap between Canada and the Rest of the world.

Belgian Gentleman on 6/22/2015.
Time for jolly old Britian to put the colonies back into their place
9 out of 12 people found this review helpful.
Review by

on 6/22/2015.
Good. Being a fan of the British Empire, I quite like it. But I don't really like the yellow colour of the rest of the world, neither the massive bold weird font. It doesn't really look like a historic map, is partly what I'm saying here. Also I ran into one thing, the British Raj, you've drawn the territories fairly weirdly also:
- No Calcutta, Madras, Lahore, Lucknow, Rangoon etc. you missed out a lot of more well known and important places.
- Some places aren't where they actually are - Chittagong, Bombay, Jeypur etc.
- Two Dhule territories - the place itself should be replaced by Bombay (South) and Indore or Surat (North)
I would have a rethink over India tbh. Not sure about the rest of the map, hoping its accurate.
Response by map creator

Imperator on 6/22/2015
The rest is probably accurate, although I did think That India was as well when I published it.
8 out of 10 people found this review helpful.
Review by Nathan

on 6/22/2015.
Very nicely done. The map is quite challenging. So many land corridors that are relatively isolated give this map the feel of a much larger board.

My only two comments are fairly minor:
- The lines showing the overseas connections are somewhat difficult to follow. I recommend straightening them out.
- I feel there really should be a trans-Pacific connection or two, perhaps to the Falklands and British Honduras.
6 out of 6 people found this review helpful.
Review by

Ξ Nanaimo on 6/25/2015.
I really like your map, and I really like the idea.
I came up with a couple of issues however,
* I believe tat Somaliland should border Western Yemen, it would get rid of two dead ends
* Antarctica is misspelled on the map(you need to add a 'c')
* I'm a little confused as to why the Middle East, Arabia, Falkland and South Georgia, and Mediterranean Colonies are part of the Africa

Imperator on 6/24/2015
Thanks for letting me know
1 out of 2 people found this review helpful.
Review by