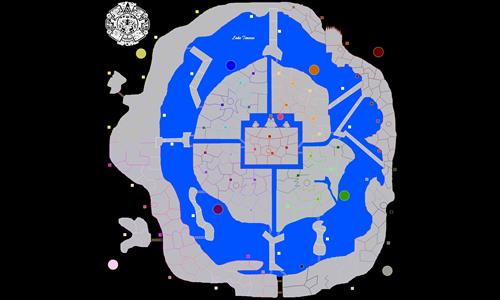 The ancient Aztec city of Tenochtitlan was built on an island in Lake Texcoco. At it's peak it was one of the largest cities in the world.
It was conquered in 1521 by Hernán Cortés, establishing a capital for New Spain - present day Mexico City. The center of town (Zócalo) was built over the ruins of Tenochtitlan.

I recommend the East vs West Scenario for two teams or players, with blockade cards.

on 6/27/2015.
Great idea! This map was a lot of fun to play on. I started with the center vs. rim scenario; it seems to favor the center - but I need to play as the rim yet to make certain. In particular, I notice that the superbonuses in the center are both worth more and easier to conquer - this does create an imbalance. I recommend balancing those out and perhaps including connections between the 4 rim superbonuses - for example, linking Keman in Texcoco to Amo in Centeotl, Amo to Malinstin in Conquistadore, Malinstin to Nikimpuoa in Nahautl and Nikimpuoa back to Keman. This would offset the dispersed nature of the invaders' forces and allow for the easier realization of encircling the city in a true siege.

PS - I got a kick out the territory named smallpox - very clever.