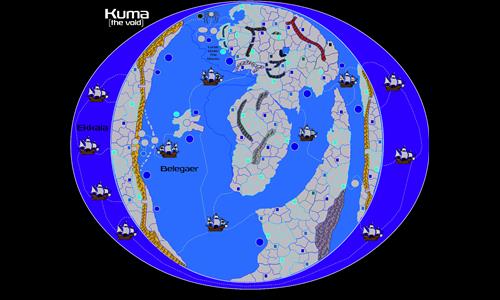 This is a map of the World of Arda, Primarily depicted in The Lord of the Rings and The SIlmarillion.

It includes the five continents that are within the tolkien canon; Aman, Hyarmenor, Endor(Middle Earth), Andor, and Romennor.

This map isn't entirely consistent as far as the official timeline goes. Most of the map depicts the early second age, before the changing of the world, while Middle earth actually depicts the late third age. This was mostly due to there being a lack of place names for middle earth in the second age.

on 5/28/2015.
The layout and beauty of this map are first-rate. I gave it only three stars, however, because of huge connectivity issues. I didn't find any broken connections, rather, the lack of connections between continents really prevents this map from being much fun.

First, Romennor is practically a single-file chain nearly 20 territories long that is only accessible from its northern tip. Similarly, the Valinor-Aman continent is connected to the rest of the world only in the far south and around the equator, meaning players have to travel 12 territories in nearly single-file fashion to reach its northern tip.

Fortunately, I think this is all easily fixed by adding the following connections:

Imperator on 5/30/2015
I actually got the same feedback from some other people, and i added more connections due to it, but I think that I will do an update soon to add these connections.

EDIT: New version is public.
5 out of 6 people found this review helpful.
Review by okasan on 5/28/2015.
Very nice map this. Would benefit from more links between the western and eastern islands, as it can make for rather linear gameplay. Also, there seem to be few starting points, meaning games against the AI start off rather crowded, and make the first couple of moves a bit of a lottery.
1 out of 1 person found this review helpful.
Review by

Belgian Gentleman on 5/29/2015.
Great for Lord of the Ring fans who seek their fantasy into a risk game.
1 out of 1 person found this review helpful.
Review by