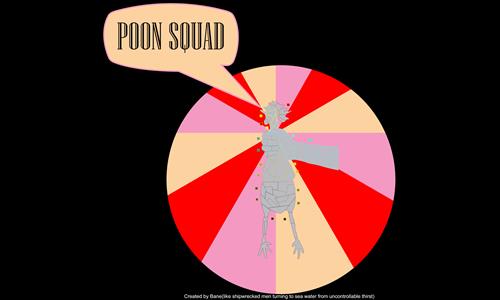 In honor of the legendary clan, Poon Squad.

on 5/4/2015.
Classic Bane. And surprisingly not a bad map, either. I got excited at one point because I've actually been to Wank, Germany.

My only concern with this map, other than its PG-13 content, is that it mystifyingly does not contain Dixville Notch, New Hampshire!!!
Response by map creator

QueefBalls on 6/3/2015.
Brilliant! Love the theme! Great gameplay!
9 out of 15 people found this review helpful.
Review by

on 11/27/2015.
Nice graphics, though I don't (visually) like the sharp edges of the territories in the chicken body.
Small playable map with no formal mistakes. There's no particular thrill (as when invading across the bering strait in medium earth...) but the geographic territory names give that little spice to the map.
I just played single player FFA with 4 AIs, and didn't chack any particular distribution mode so take this small review "as is": small and limited.
3 out of 7 people found this review helpful.