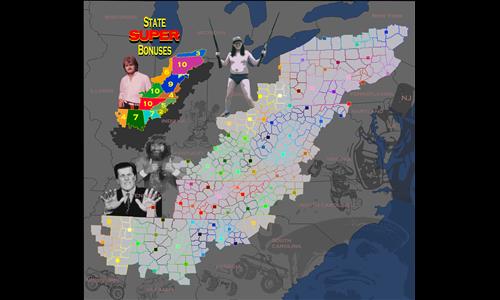 on 5/29/2015.
Soooo-eeee! Playing on this map made me happier than a dog with two ding-a-lings! It's a great concept and it's neat to see how geological features overlay political borders. The map is well designed and well-balanced. It's also quite challenging, as - despite appearances to the contrary - there aren't really that many good corners to hide in while building up your power base.

So fire up your interwebs and get ready for a mullet-wearin', monster truck-rallyin', cousin-lovin' shindig! Yeehaw!
17 out of 17 people found this review helpful.
Review by

Belgian Gentleman on 5/29/2015.
Trucks,drunk and guns,
Blortis showed us his great American pride. Awesomely designed by famous wrestlers outside of the Appalchias and American stereotypes.
Surely America rocks by this. The bracelet of Pampino quite resembles a territory and honestly it fooled me at first sight. Some unexpected touch here.
Further on the dark grey shadow under the scale map have broken and uncompletely lines which better should be removed at once. I would also reccomend to connect east Tennessee with its western part so the super bonus is easier to achieve.
Response by map creator

on 5/29/2015
I had all kinds of ideas for stereotypical crap I could jam in here but I decided to leave out the more depressing ones like a prescription bottle. I tried to keep it fun.
Pampino? I know him as Hillbilly Jim from Mudlick Kentucky. I agree about the wristband but I think it's easy enough to tell that it's not a territory because of the lines going through fogged territories.
I also considered connecting the two parts of Tennessee but they're only separated by two territories so I didn't think it was too important.

Andrew on 12/26/2015.
Thought this is a great map! Very open, there is nowhere to hide, and none of the bonuses are overpowered. Have played multiple games on it, it's great for large team games! The background pictures just make it all worth it.
3 out of 3 people found this review helpful.
Review by warhawk on 10/6/2016.
A 6 player game on this map was a good combo. The super bonus were a great addition.
2 out of 2 people found this review helpful.