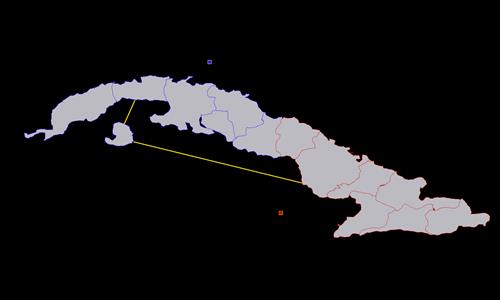 Hello! This is my first map, made more of as an experiment than anything else, please leave any and all critques below!

Review by XpowersurgeX on 2/5/2015.
Nice map but I see a problem there: In 1v1 the player who reaches Camaguey first will almost definitely win. Here's why:

In the preset scenario it is imbalanced in my opinion, but I think this map has a lot of fun potential in FFA with 4 or more players.
1 out of 1 person found this review helpful.
Review by Nathan

My strongest suggestion is to redraw your borders. They overlap a great deal and this makes the territories appear to change shapes. It's not a big issue on a map this small, but as your maps increase in size it can present a problem with connections and visibility.
1 out of 2 people found this review helpful.
Review by