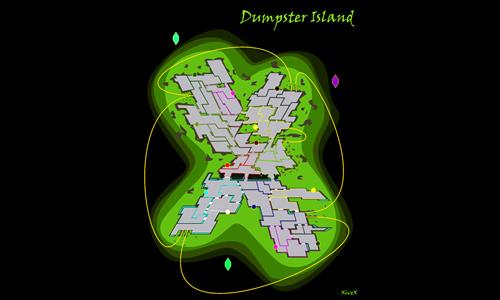 The humanity due to its greed and ignorance of its long-term effect has decayed the planet into an unhabitable state. The oceans have turned radioactive and acidic, the sky has become black and the whole surface of the planet now loses heat and drives itself into another ice-age. Now the surviving 10% ( about 80 million people.. remember, it's in the future) are struggling to survive in the few livable places that are left. One of them, a massive garbage island off the coast of France is home to many rivaling factions, that try to kill each other for whatever they can find on this island.

҈ * TeeMee123҈ * on 12/16/2014.
Great map! Good style and attention to detail. A very interesting map to play through too, especially on 4player FFAs. The ports make starting positions fragile, but allow for great strategy. I think this makes 4/5, not 5 as I am a bit worried about the balancing of the north eastern island as a starting position. Could be better if each sort of corner of the 'X'was a superbonus. Also a few connections are missing.
Response by map creator XiveX on 12/16/2014
Yes, I was too excited about publishing it, made only one test run. Big mistake. I won't make that mistake again. And I also need to work more on my strategy placements in maps, for now they are quite flawed.. Thank you for the feedback! ^^
2 out of 3 people found this review helpful.
Review by G_GR on 12/16/2014.
nice
0 out of 0 people found this review helpful.
Review by