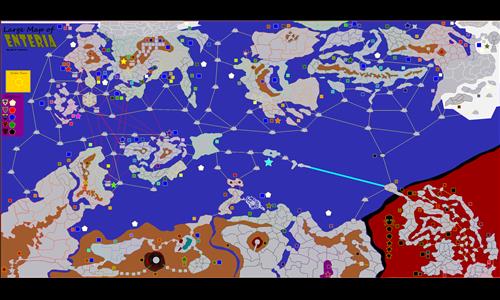 In the Ages of distant Dimensions there lies a Fantasy map called "Enteria", a 540*289 km large rectangular flatworld seeded with unique locations, plains, mountains, oceans, beaches etc. along with fantastic creatures. But everything has changed when the Evilside rampaged. Terror has been seen by the Goodside and thus the epic war between Light Enteria and Dark Enteria has begun.Which side's path you wanna choose?

on 1/13/2015.
Great map. There are tons of imbalances and some more distribution modes would make gameplay more equitable. There are also a few missing connections, Copperia in the Newgoodlands, for instance, and Ruthless Dunes - Thornfront.

Those things aside, this is a very visually innovative, if occasionally cluttered, mapboard. The red lines between airports are a bit confusing until you realize that airports only connect to other airports and their immediately adjacent cities.

There are also a lot of dead-ends. That's not a criticism, just an observation that players need to be very careful to make sure opponents are completely defeated, lest an enemy pop out of a cul-de-sac and make life less pleasant.
Response by map creator

I did this unbalanced because it gave me more realistic view of the map (You know cities, forests
4 out of 4 people found this review helpful.
Review by