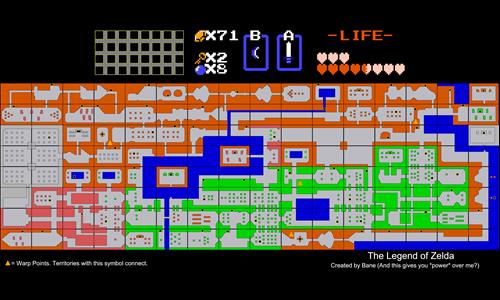 The Legend Of Zelda

Based off the 1987 Nintendo Entertainment System game, The Legend of Zelda.

on 3/30/2015.
Wow. This is super cool! When I saw the title and thumbnail I was wondering how you would do the bonuses, but it totally works.

A couple thoughts:
- Why not make the warp points connect? That would help with the turtling that becomes an inevitability with this map.
- Why do the money-making games in A2 and M8 give a positive bonus, when the ones at G8 and P2 give a negative one?
- I could see a negative bonus because of the falling rocks in H2, I2 and J2.
- Isn't there a potion shop in the desert that is revealed by the recorder? I'm thinking J3.
- No bonus for the waterfall advice lady in K2?
- You have to make a second quest map, too!
Response by map creator

my idea with the money making games is that you could potentially lose money (when i played, it was most of the time)

I wanted to make the warp points connect, but I figured it would be confusing to some players. Maybe ill add them and show they connect with an icon, or something.

Unless im mistaken, the recorder only activates the lakes in the first quest, in the second quest it reveals a heart container and something else in the desert.

I forgot the waterfall lady! whoops. Ill have to add her.


I was thinking of making a second quest version of the map, but first I want to make a map containing all of the dungeons (Levels) for both quests combined. I initially wanted to include the first quest dungeons in this map, you would enter a dungeon from the overworld, but the map would have been way too big.