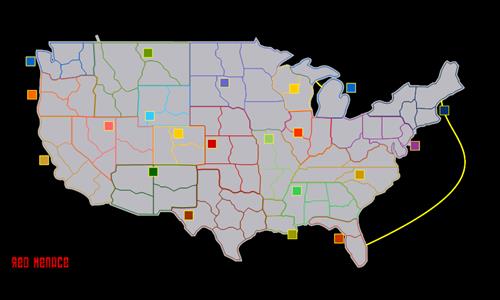 A nation born from war, it has both saved the innocent and enslaved it. Undeniably a world power, it has suffered times of struggle and times of greatness. Will you, wise leader, gain the hearts and minds of the American people or rule this land with an iron fist?

Additionally, there are many wrong territory names.

There might be more, but those are the most obvious.

Overall, it's a good map, but I'd give it a 3/5, partially for wrong territory names, but also because I slightly prefer the US Regions one over this (they're essentially the same map, but with different territories/bonuses). Nonetheless, it's a good map, and without the wrong territories, I'd bump my rating to about a 3.5/5.
Response by map creator Red Menace on 11/12/2014
Thank you and I'll be fixing the naming issues. I myself found US Regions to large for a quick 1v1 and United States to small with a lack of re-playablity so I decided to make this, not to small but not to big. The varying sizes of bonuses, their placements, and general geography makes it strategic, especially if you play with the right settings (wastelands, cards).
2 out of 4 people found this review helpful.
Review by Bob on 6/16/2022.
okay. small
0 out of 0 people found this review helpful.
Review by Andalorium on 1/29/2017.
Most USA maps weigh the east stronger than the west I like how this one is not that way as much, nice job.
0 out of 1 person found this review helpful.
Review by

on 11/20/2014.
Great map! This is one of the very few I gave 5 stars. There are little minor complains I have. (I told you in the game.) But here they are:
You could have the smaller bonuses on the inside and the larger on the outside so players are more likely to begin in the center. Or you could have individual bonuses for each state then ad secondary bonuses for larger areas.
Also you could put a connection between southern Texas and Florida. Fun, brutal gameplay! Great for 1v1's. Great map once again!
Response by map creator Red Menace on 11/23/2014
I edited the map which now fits your suggestions!
0 out of 2 people found this review helpful.
Review by [₩Ů£F] £Ų€ÏĐ ĎŔĒÅMĘŘ on 11/26/2014.
Good merica
0 out of 3 people found this review helpful.
Review by Shnitzerbud