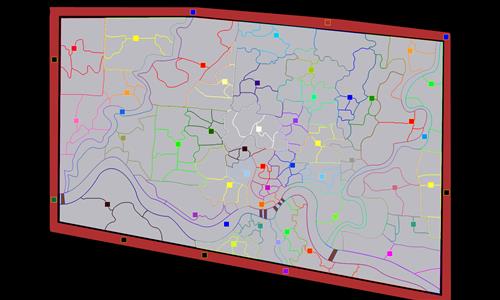 Greater Cincinnati Area. Rivers are territories, but have a large negative bonus. Ohio River can only be crossed by bridge. Little Miami, Great Miami, and Licking Rivers can be crossed anywhere.

A couple suggestions:
- there are a few territories that should not connect but do anyway
- the Licking Riverbank bonus may be a bit large
3 out of 4 people found this review helpful.
Review by okasan on 11/13/2014.
Weird map, with the huge malus for the three rivers. Playing against 1 AI (default setting), it holds its own until it conquers all three rivers, after which one finds oneself playing against an opponent with exactly zero armies per turn: taking candy off a baby. Having said that, it's still an amusing little map.
1 out of 1 person found this review helpful.