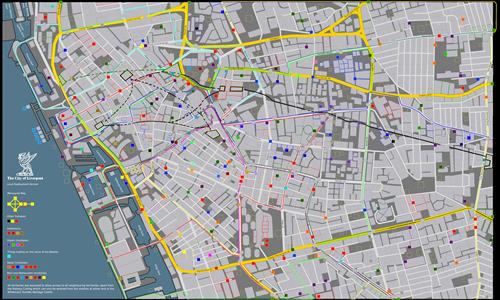 With the exception of the Lime Street Railway Cutting, all territories are assumed to have entrances on all sides, and move into all adjoining or nearby territories unless there is something else in the way.

The railway cutting can only be entered from the stations at either end or the Williamson Tunnel Visitor Centre.

Note that the trains, busses and the Birkenhead tunnel can all be used to transport your units around the city.

on 6/5/2015.
I love - I absolutely adore - huge maps. I was incredibly excited to see this map come out. It is beautiful, it is massive, it has a variety of connections and incredible detail.

Unfortunately, it is also completely unplayable in a standard game. I estimate about 70-80% of the territories have no bonuses associated with them. Other than the rail connections, there is no good way to bypass the worthless zones, so you basically have to go through them and - here's the rub - defend them. But because bonuses are so few and far between, it's impossible to maintain anything approaching reasonable control of one's territories. It's just a giant, amorphous melee that goes nowhere.

I'm going to try it again playing with plus-armies-per-territories toggled on. I don't see any other way to make this map practical. I will revisit my rating then.

Much better playing this way! There are still quite a few missing connections, but some distributions will greatly improve this map.
Response by map creator amos2000 on 6/3/2015
Hi. Thanks for the review!

Yeah - this version is optimised for local deployment, for which I stripped out all the regional bonuses, because it's about taking and defending key territories. I've been playing a lot of LD recently so I focussed down on that first. There is a standard version that I'm working on, but after testing I realised I needed to rebalance all the regions, so I pushed ahead with the LD version which I was more interested in anyway.

It'll probably take me another month or more to finish the standard version. But seriously, try it on Local if you can :-)
5 out of 5 people found this review helpful.
Review by Tarhani

Very detailed. A must for all beatles fans. (Where do I find strawberry fields?)

Some strange or broken links, but ok, nobody is perfect.
Response by map creator amos2000 on 6/4/2015
Strawberry fields and Penny Lane are just off the map to the east. But LIPA is the former school of McCartney and Harrison, and they used to ride the number 82 bus in and out of town...
5 out of 5 people found this review helpful.
Review by okasan on 6/7/2015.
Brilliant idea. If you play this a couple of times, you can probably find your way around Liverpool with ease (won't take any of the buses in a hurry though). The way the bonuses are distributed makes this quite a different strategic challenge - for those of you who know the game Go, this is the way to go: try to enfence larger areas without wasting troops in the inside. Against 3 AIs, this made for a 26 turn game, but it did take forever. Map, idea and execution are so fantastic, I won't even make any Scouse jokes :)
2 out of 2 people found this review helpful.
Review by Fleecemaster

on 6/17/2015.
The connections are not clear enough, it's a bit painstaking to set attack orders. Really nice map though, in terms of quality. Just a little too hard to play on :(
1 out of 1 person found this review helpful.
Review by