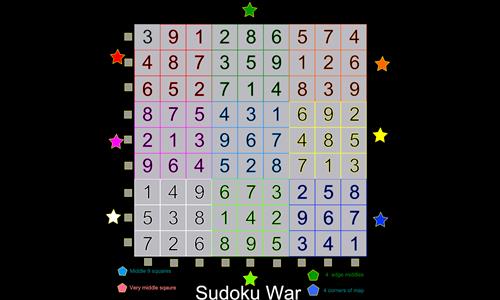 Fixed a bug where magenta gave less than other boxes. (Rose from 4 to 5)
Nerfed the center number bonus from 3 to 2.
Added a bonus to correspond with 4 corners, except for the edges.
4 corners bonus nerfed from 10 to 8.
Fixed a bug where 52 and 72 connected.

on 9/26/2014.
Interesting concept. The large numbers, while obviously a part of the map, are still somewhat distracting. Despite the differences of this map from traditional terrain-type maps, gameplay is strikingly similar.

One note - 72 and 52 connect, but should not.
Response by map creator Captain Teemo on 9/27/2014
I can't do much about the number size at this point, as they are cut into the squares in my SVG... changing that would require remaking the whole board. I personally think they're about the right size considering that's how a sudoku normally looks.

The idea of the map is to be a quick/easy/fun map. I'm not sure if similar gameplay is a bad or a good thing by your review.