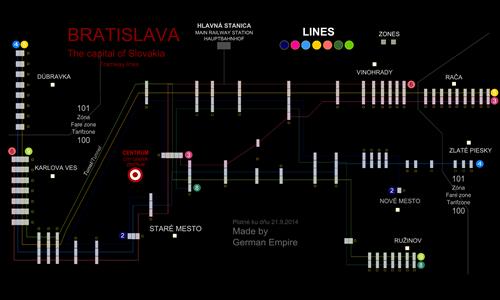 MADE BY: Russian Empire (German Empire is my older name)
This map is about city Bratislava (capital of Slovakia) and it's tramway lines.

on 9/28/2014.
Youll get people who will complain about balance, and while that may be true, who cares. This map looks very good and was fun to play on.
Response by map creator

European Empire on 10/24/2014
Thank you very much :) It is great to read something like this as map creator! :)
3 out of 3 people found this review helpful.
Review by Nathan

on 9/30/2014.
It's a cool map and a fascinating intellectual exercise. Unfortunately, the lack of distribution modes makes starting positions - which on this board will almost always decide the contest before it begins - just a crapshoot. Develop a couple of distributions and playability will greatly improve.
Response by map creator