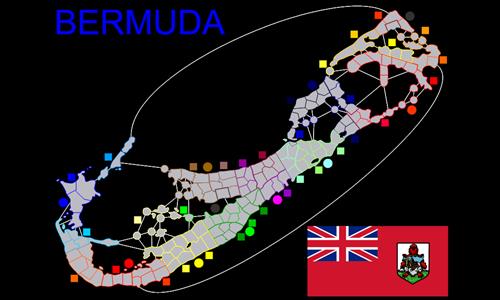 Bermuda is a British Overseas Territory in the middle of the North Atlantic Ocean. It is fully self-governing in all areas except defense and foriegn affairs, where its intrests are represented by the UK. Bermuda is famous for the Bermuda Triangle, which is made up by conspiracy theorists.

For this map, I've used the 9 parishes and the 2 municipalities of Bermuda as the super-bonuses. The territories are places, roads, parks, beaches, etc. loacted within that territory.

I'd suggest lowering the border on East South Shore Park just a smidge to make it more clear that it doesn't connect to Northeast Southampton.

I'd also like to see each of the bonuses having a different color than their neighbor. East/West Warwick, East/West Pembroke, and the Parish at the top-right.

Found one missing connection: Cooper's Island Nature Reserve - Brangman's Fort
Response by map creator An abandoned account on 12/22/2014
I've created a version 1.1. I've lowered the boarder and fixed the missing connection. Now I just have to wait for Fizzer to accept it.

on 12/26/2014.
Nice little map. I appreciate that you have connect the ends of the island group to each other on both the NW and SE sides. I have only one very small suggestion for improvement - maybe add a small line showing that Store Hill and Flatt's Village are connected; it isn't instantly apparent.
Response by map creator An abandoned account on 12/27/2014
Although I an see what you mean, there isn't really a need for it as Store Hill shares a land boarder with Flatt's Villages, even though it isn't a boarder the piece of land with the number in it.