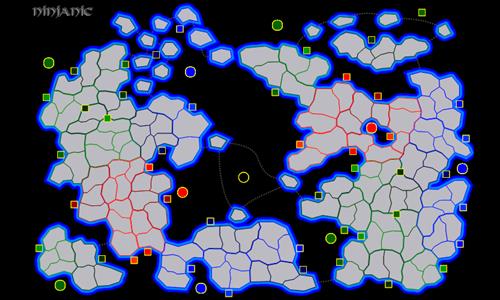 Planet of the Tribes

The small bonuses have very low value, but the full countries have a considerable amound of armies to live by.

Review by okasan on 9/8/2014.
Very enjoyable one v one map. Clearly drawn, well balanced, with a triangle of strategically important islands the key to success (suggestion: their malus could be even greater than the current value of minus one). Since it's a one v one map, I would like to see both parties starting exclusively on opposite ends of the map, though perhaps the creator of the map deliberately wanted to add some spice to the mixture, to avoid a 'mirror' image map as there are already quite a few. For me, the Cuba map remains the best one v one map, but this one is right up there.
Response by map creator

on 9/9/2014
Thanks! I'll add in another 1 v 1 distribution now that you mention it!
2 out of 2 people found this review helpful.
Review by Nathan

Another solid map. I really enjoy your use of smallish superbonuses to add another element of depth to your maps. Also, the use primarily of very small bonuses (almost all 1s and 2s) requires a somewhat different strategy than maps that feature larger bonus areas and army rewards.

Still, I feel somehow - and I can't define what I mean really at all - that this map lacks the personality that I usually feel when I play on your other maps. Maybe it's the use of the random name generator again. I don't know. So while it's definitely a 5-star map, gameplay was just missing a certain something. Sorry for being so vague.
Response by map creator