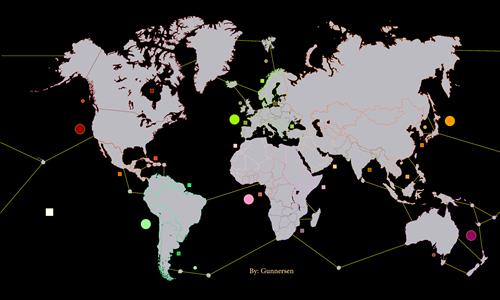 A map of the world, played with territories based on the nations/countries of the world. (excluding the really tiny ones)

----- v1.0 -----
There is a very easy to follow pattern to the map:
-Every continent has a mega-bonus, which grants troops based on about 50% of the continents territories (ie: Africa has 39 territories, and it's mega-bonus is 20 troops). (only noteworthy exeption is Oceania) (this rule excludes +1 bonuses, like Korea)
-If you wonder how many troops a continent grants all in all, you need only look to how many territories it contains, the two numbers are always the same.
-Any normal-bonus also grants troops based on 50% of the bonus' territories.

on 8/31/2014.
Not a bad little world map at all. IMO the superbonuses are too large. Kudos, however, on the number of trans-oceanic island crossings. They liven up the game. Also, the link between Niger and Burkina Faso is broken.
Response by map creator Mr. G on 8/31/2014
Thanks for the constructive input. I'll go over the territory liks one more time *sigh* and release it as 1,1. I'll see if there's anything i can do with the continental bonuses, i think it's a valid point, but i fear the only good solution would require me to back to Inkscape, and i'd rather not.
2 out of 2 people found this review helpful.
Review by Ranth6622 on 9/9/2014.
i like the map alot
i am thinking there should be a bit more path ways from europe to africa
but over all very good map
0 out of 0 people found this review helpful.
Review by

Жұқтыру on 10/5/2014.
Poor map; at least, design-wise. Several countries have been swallowed; I know that it says this in the description, but you already included many small countries anyway; most notably, Moldova. Kaliningrad has been swallowed by the sea. I could accept the "Glorius Monarchy of Norway" if it was spelled right, and also, Scandinavia is spelled wrong. Western Sahara is also spelled wrong. Also, I'd like to see more smaller countries, excluding the ones that are city-states (San Marino and Vatican City, pretty much). Also, Russia controls Crimea, but that's (somehow) debatable, so I'll let you off on that. However, you decided to make Kashmir seperate from India and Pakistan? I could understand Scandinavia and a few neo-colonies, but Kashmir is directly connected to India. I really think that all countries should be just one territory (Combine US Alaska Puerto Rico). You left the top 3 biggest countries undivided, yet decided to divide the fourth into 3 pieces. Running out of space. Gameplay - Mediocre.
Response by map creator Mr. G on 10/14/2014
It was my 1st map, so it's almost bound to have flaws. I didn't realize the part about Kashmir, some typoes, splitting of countries: stuff i didn't really think about at the time, nor really bothered to. I too agree that it's not so great to play on, mainly because of big countries like Russia, but i can't do anything about that.