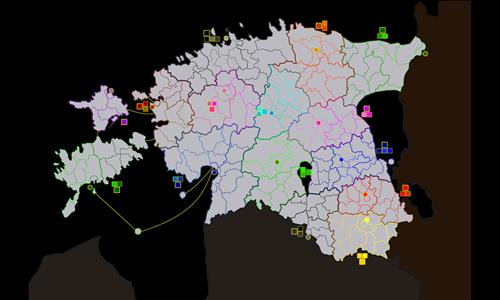 Estonia and it's counties

Estonia and it's counties except some cities

on 9/29/2014.
It's a great map with excellent attention to detail. Its greatest flaw (besides the spelling of "its") is the imbalance of several bonus regions. West Raplamaa and South Laanemaa, in particular, are particularly overvalued, each offering more bonus armies than the number of territories they include. Secondarily, I agree with the previous poster about the desirability of including superbonuses for each region.
Response by map creator Aldehyde on 10/1/2014
Thanks! I somehow missed the imbalances, but they're fixed now. Also I added superbonuses for the counties as suggested :)
2 out of 2 people found this review helpful.
Review by

on 9/27/2014.
This is a well made map with a lot of strategy to it. The only thing I would add is superbonuses for the counties.
1 out of 1 person found this review helpful.
Review by VladimirVilimaitis on 10/9/2014.
Unusual distribution of superbonuses is an aspect which makes this map interesting for me - parts of a region are worth slightly more than superbonus itself, while a certain region in biregional cluster is worth slightly more than the other one. Generally, however, the map feels quite inbalanced, due to the fact that some bonuses, like Ida-Virumaa and Vorumaa, are less accessible to attacks from multiple flanks that central regions, but such mapmaking decision is understandable, for as breaking it would break the political aspect of the map, and, quite honestly, for a clever player that wouldn't be a huge deal, since starting from safer area and then growing towards more open one is a common sense strategy. I can also see how this map would be quite fun on moderately large team battles.
Response by map creator Aldehyde on 10/10/2014
Thanks for the feedback!
For superbonuses the income i used, was the number of territories divided by 4 and rounded up. For normal bonuses it was number of territories minus 1 or when a city was present minus 2.
Also I've now fixed all the borders between bonuses and some ugly territories.
1 out of 1 person found this review helpful.
Review by G_GR on 12/12/2014.
nice
0 out of 0 people found this review helpful.