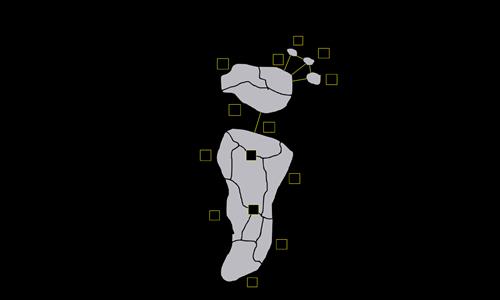 Review by Andalorium on 1/16/2017.
Discus and Kangoe have their numbers switched which made it hard to figure out why i was having such problems up at the top.
0 out of 0 people found this review helpful.
Review by Kris on 9/11/2019.
This is a small map with territories arranged in a rather linear way. Maybe there is some underlying story why the foot has only three toes, but a serious problem with the map are two toes - Kangoe and Discus - which are wrongly assigned. This leads to many confusions.
1) When a player controls one of the toes, the number of armies is correctly placed, but the other toe is painted.
2) To use the armies from one toe, the other must be clicked.
This has been already a problem for at least two years.