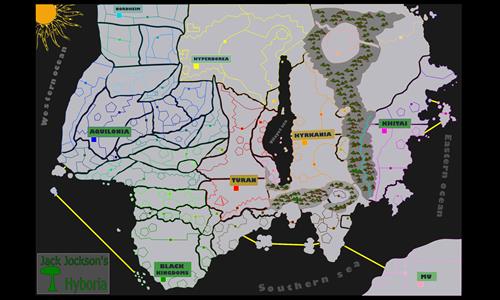 from fantasy map of comic book Conan the Barbarian

on 8/19/2014.
It's a distinct improvement on the smaller Hyperborea map. However, success on this map is still largely dependent on where you begin. While it's true that starting in the center of the map is always difficult, it takes players beginning in Hyperborea much longer to collect their first bonus (9 armies for 13 territories) than those beginning almost anywhere else.

Additionally, it is sometimes difficult to tell when territories border one another, as they are frequently separated by black spaces of varying thickness.

Beyond those issues, however, this map has a cool layout and features numerous territories-within-territories that makes it impossible to simply steamroll through your opponents' lands.
1 out of 1 person found this review helpful.
Review by Lou ShyPhere on 3/4/2019.
This is a great map. Harder than it looks.
This is the land Conan The Barbarian was born, raised and battled in.
0 out of 0 people found this review helpful.