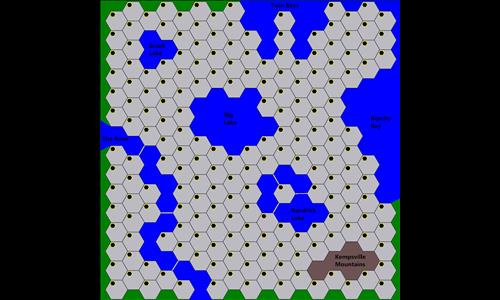 This is a diplomacy map with each individual territory having its own bonus worth 1, 2, or 3 armies each.

Due to the simplicity of the hexagon shapes, this map will take up a very small amount of your mobile device's memory, despite being a somewhat large map.

Some shoutouts to my favorite mapmakers are hidden in the territory names, and some other random suggestions for territory names were gathered from the community in this thread:

on 8/26/2014.
This is the most fun I've had on a pure diplomacy board. The chokepoints introduce a greater element of strategy. Very nicely done. Kudos also on the creative territory names and the homage paid to other map designers. :D
Response by map creator Nightshade on 8/28/2014
Thank you so much! I honestly did not put much work into the actual drawing of the map, but the extra effort I had left in me went into strategical placement of the territories and of course, the territory names. I am glad you enjoyed it!
3 out of 3 people found this review helpful.
Review by Andalorium on 12/2/2016.
Even though diplomacy is one of my least favorite types of maps, the numbers where low enough that it does not really set one player above another until someone starts taking over sections.
1 out of 1 person found this review helpful.
Review by Risikolos