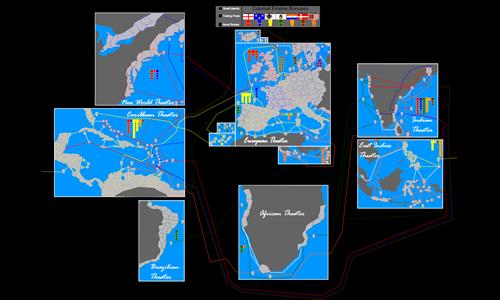 My only 2 complaints are that France is small and lacking the detail in territories of that of Britain and Spain. Because of this, its bonuses are smaller, which means that if you try to replay the war of Spanish Succession, the game is over very quickly. Also, Brazil is hard to reach, yet I can travel from the West Indies to India in one turn!

Besides that, it's a good and accurate map, and one of my new favorites. 4/5 stars
15 out of 16 people found this review helpful.
Review by Nathan

on 8/12/2014.
This map has great potential, but it definitely could be improved.

Next, there are too many dead ends and regions of limited access, e.g., the Venetian colonies, French Canada and Brazil. This impedes gameplay as too much of one's time is spent chasing down pockets of resistance.

Finally, and most critically, the map is way too visually confusing. Tracing the overseas connections made me feel like I did when attempting to navigate the Munich transit system after one too many beverages at Oktoberfest. It made my head heart.

I suggest using a single overseas portal for each theater with connections to numerous ports and other theaters. That would greatly simplify the map and help make it the awesome board it can be.
9 out of 9 people found this review helpful.
Review by