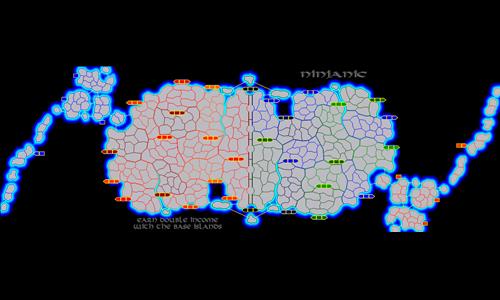 For the bonus island distribution, you should have the player start with many armies, so when his income goes to zero, he can still reclaim the full archipelago bonus.

Review by okasan on 8/19/2014.
Mirror image layout makes for strategically challenging gameplay,a fine balance between amassing troops and rushing to the separating wall is needed. However, the super bonus/malus, while a great idea, doesn't really come into play, as there are no obvious chokepoints here, and the smaller islands are just too far away to make it worth chasing down there. Suggestion: make the wall only accessible from the two islands north and south of it (Waxost and Bifomc) with Waxost only accessible from the East and Bifomc only accessible from the West, for instance. In any case, this is still a highly enjoyable map.
Response by map creator

on 8/19/2014
I like your idea! So whoever gets to the wall first has the big advantage.
3 out of 3 people found this review helpful.
Review by Nathan

on 8/19/2014.
Great concept. The bread-crumb trail to each base is perhaps a bit long, but it doesn't really affect gameplay. A very nice job once again!
Response by map creator

on 4/3/2015.
This map doesn't make sence -50 armies for holding an area were you start?!
0 out of 0 people found this review helpful.
Review by Dug M on 8/23/2019.
This is a good map. Makes you think and plan more than most. My only problem is that there is no way my opponent AI can come up with that many armies that soon.
0 out of 0 people found this review helpful.