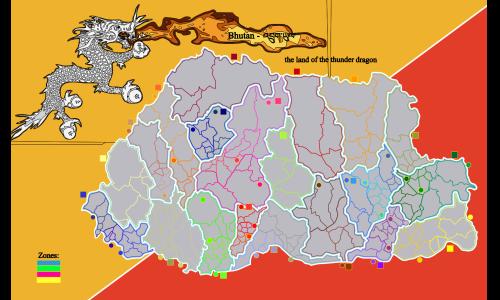 Bhutan or Bhoetan ( sometimes also reffered as the country of the thunder dragon) is a tiny country between India and China. Capital Timphu. According to the Happy Index , Bhutan is indicated as the happiest country on the world. Smile ;)

Review by okasan on 9/28/2014.
A map designed by, in my opinion, the best map designer in this game, cannot fail to bring excitement. Very clear lay-out, strong borders, good distribution of bonuses, all adds to the beautiful design.

For the non-paying customer, there is only a one-v-one option against the AI, with two fixed starting positions either in the South-East or in the South-West of the country. AI plays reasonably strongly, though this is not a difficult scenario to beat.
The game, however, is not perfectly balanced: the South-East starting position is by far the stronger. After several playthroughs, I had 90-108 armies when first meeting the AI coming from the West (the AI having 50 ), while it was nip and tuck coming from the other end, with both parties in their 60s or low 70s. The starting regions are 10 bonus armies for respectively 11 and 16 counties, with the latter taking 5 turns to accomplish (four with some luck), and the former only 3 turns.
I am also happy to know that there is a place in this world called Dungtoe.
7 out of 9 people found this review helpful.
Review by Nathan