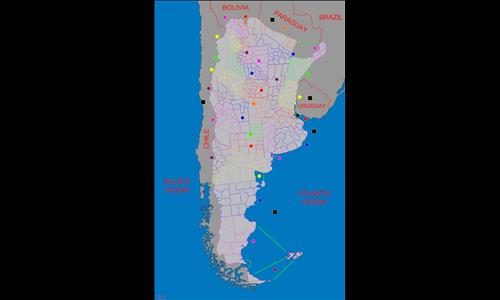 Every time I make a map, I use a map from the goverment of the country (unless some specific maps when I specify that it is not the case). So, Argentina claims the territory of Falkand Islands as own, so in this map I include it as part of it.

If I had to do a map of all the Brithis territories, I would use a map of the British government, and I would include the Falkand Islands in there.

So, if you are upset with this, don't blame me, blame the Argentinean goverment xD
I forgot to make it clear before but this is how I work... I know I risk to a lot of 1 rates but I don't really care.

This is not the place where I will discuss about the control over Falkands Islands, everyone has the right to have its own opinion, but I understad this polemic as childish and out of time (we are not in colonialist era anymore). So I will let this discussion only to Falklanders, it's obviuos that my opinion shouldn't matter, the same way as the opinion of any British or any Argentinean (at least as I understand).

Solid map. Unfortunately, it's very easy to start in the south and simply roll one's way northward. This isn't the mapmaker's fault, of course, it simply results from the geography of Argentina.

However, I think you could alleviate this problem by making the bonus regions smaller. Not only does the south enjoy the strategic advantage of positioning, but it also has the smallest bonus areas, giving an additional leg up to the player able to acquire bonuses very early in the game. Providing smaller bonus regions and more of them would allow other players to gain bonuses at a similar pace and thus level the playing field.