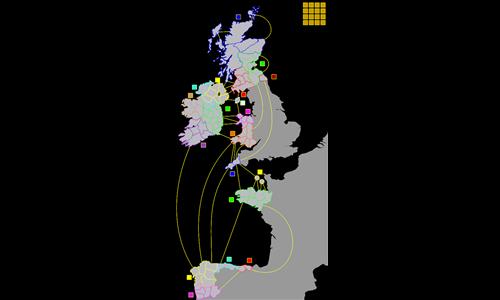 This map is of the celtic regions of the UK, Ireland, France, Spain and Portugal. The map includes; the 6 celtic nations along with other places with celtic heritage.

Brittany, Cornwall, Ireland, Scotland, Wales and the Isle of Man are the 6 celtic nations where celtic languages are spoken today, even though most of these are minority languages.

Galicia, Asturias, Cantabria and Norte host celtic festivals and have celtic heritage, even though no celtic languages are spoken there.

Berwick-upon-Tweed is the most northern town in England. Throughout history, it has changed hands between England and Scotland. Due to the Scotish past of Berwick, it is often counted as celtic.

Also, I know that the Channel Islands aren't celtic, but I didn't realise that when I made this map. However, they're included on the map anyway, so they might as well stay there.

on 6/17/2014.
Neat map and neat concept! The numerous connections prevent games from devolving into camping slogfests. Very well suited to a 1v1.
2 out of 2 people found this review helpful.
Review by

Ox on 8/21/2015.
I love the concept, and how you included Berwick-upon-Tweed for the large Scottish minority living in there. Had a very good time playing the map - the bonuses are nice, and found no wacky connections. An underrated map for sure. Something I must point out though, is that a large amount of Scotland do not speak a Celtic Language, so it seems a bit far-fetched to put a lot of it under "Celtic Language Areas". Your geography overall is really quite good (but that Falkirk territory is a bit dodgy).