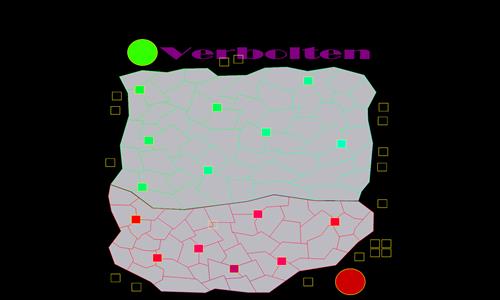 VERBOLTEN is a fiction map, it is not real. This map was created by Verbolten . Rate it very good ill make a bigger version of it. If you encounter any problems, missing connections message feedback me. If you have any suggestions to the map let me know and ill make a second version and might include what you suggested. Other than that i hope you enjoy this map from Verbolten, a map called VERBOLTEN

Krulle on 5/28/2014.
Interesting.
But alas, due to a player using the same colour as you use for the borders, I was unable to see which countries neighbour which ones. Especially in the light blue colour range, that became a real problem.

In total, nothing special, and a good solid map.
Response by map creator Noisy on 5/28/2014
Ok i will next time space it out between each bonuses in the next version i make, thanks for commenting
0 out of 0 people found this review helpful.
Review by Nathan

on 5/28/2014.
Solid - not spectacular, but fairly well-balanced. I would describe this map as "seriously OK."
Response by map creator Noisy on 5/28/2014
Thanks for your input, I will make the map bigger as i release each versions. and i will and some special bonuses and a north and south bonuses and east and west bonuses
0 out of 0 people found this review helpful.