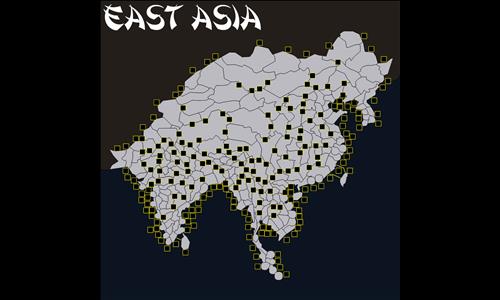 on 10/14/2014.
I hate to give a rating so low (2 stars) for such an intriguing map, but it is completely unplayable. While allocating diplomacy bonuses of 1 to 12 is a neat idea, it generates hideous imbalance issues. For instance, I played the Later Han scenario (220 A.D.) a few times and saw initial incomes ranging from 9 armies to 41 armies! In one game, I had an income of 225 armies on turn 4! The disparity in bonuses is simply too great and the rich territories are clumped too closely together. EVERYTHING depends on where a player begins.

As for aesthetics and game mechanics, while I appreciate you providing the cutouts for India and Indochina bonuses, it is still very difficult to make out what a territory's bonus actually is. Perhaps if you named the bonuses the same thing as the territories to which they correspond (e.g., "Central Doab" instead of "71"), it would improve things.

Finally, there are multiple connections missing to Arakan.
Response by map creator MrOobling on 10/19/2014
Indeed it is very unbalanced when playing against the ai, however, in a diplo game, you will not be able to gain 200 armies in 4 turns as alliances world be made. Also, if a balanced rather than historical game is what you want to play, then you should play the much more balanced 24player diplomacy scenario. I understand what you mean by the numbers and might fix that and the Arakan links. The missing links were made after I decided that it was more historical to have Arakan as one territory instead of two (you can still see two bonus circles).
2 out of 2 people found this review helpful.
Review by Captain Carrot on 10/21/2014.
Excellent Map. Very difficult.

A saw a bug in Arakan (not connected with its neighbors Ragoon and Toungoo).
1 out of 1 person found this review helpful.
Review by