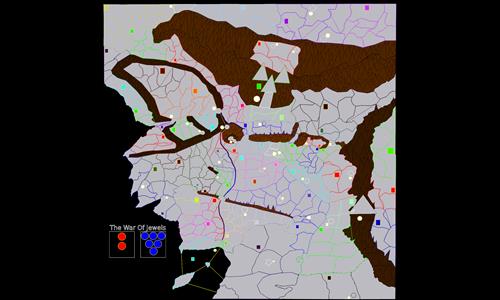 A map of Beleriand, The Place which many of the events of the silmarillion take place.

This map is made primarily form two different sources, one of which of course is the map of beleriand found in the silmarillion. However, I did use a secondary source for the Lands North of Anfuaglith, which of course aren't included in the map from the silmarillion. This source was karen-wynn fonstads map of beleriand, which does include angband and a portion of Dor Daedelos. I decided that angband was such a crucial place in beleriand that it wouldn't be a very good decision to exculde it.

However, becuase of this, None of the regions north of Anfauglith should be considered Canonical, even in the strict sense of karen-wynn fonsatds work. The reason for this is because I only adopted the shape of the Land from the atlas of middle earth. The borders of everything in dor daedelos(with the obvious excepetion of Angband) were just made up by me.

Everything south of anfuaglith is canonical though.

on 6/11/2014.
Incredible map! So many maps of Middle Earth could use the terrain far more effectively - this one really does so. The scale is grand and the battles are glorious.

My only substantive (as opposed to aesthetic) comment is that the northern wastelands should probably connect down to Angband and/or eastern Ard-Galen, just even things out a bit.

on 6/11/2014.
Estolad Fortress is untagetable, as it is placed beneath south estolad. if this is fixed it would be a decent map
Response by map creator

Imperator on 6/11/2014
Since this is a pretty major screw up, I've fixed this and submitted a new version right away :) Hopefully you weren't too pissed off and you can find it in your heart to give me another chance(This is my first map).

EDIT: The New version has gone public, so this issue should be fixed now :)
2 out of 3 people found this review helpful.