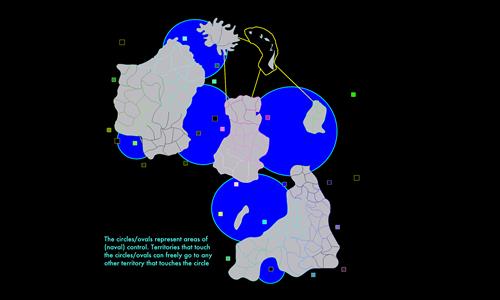 This is my first map,
Right now, version 2.0 is available as of Nov. 6 2014
*I'm so excited to have updated my map to the point where it almost 8-tupled(octupled?) in playable area.

on 7/7/2014.
Firstly, thanks for making this map. I always appreciate people willing to contribute.
Secondly, there is a missing connection between Cape Cors and Rivermoth.
Thirdly, your division lines are a bit choppy and lead to weird extra blackspace around some territories especially noticeable around the Montan Beu area.
Fourthly, some of your territories overlap each other like Capital District and Outer Talia.
All in all, you have made a solid contribution to warlight and I look forward to seeing you grow in your mapmaking abilities! Also, I am part of a mapmaking group that help each other out. If you would like to be part of this group, just contact me and I'll plug you in! Thanks for your efforts!
Response by map creator qwed117 on 11/6/2014
Now that I am done with the second version, I would wish for you to change your rating so that it is more fitting with the new map
4 out of 4 people found this review helpful.
Review by Nathan

on 7/18/2014.
This map is a great first attempt. The bonuses, while large, are not overly so and make for a challenging FFA game.

A couple thoughts on improving this map:
- Several territories overlap one another (e.g., Capital District and Outer Talia). You may want to edit your SVG file to make the borders contiguous. One way of doing so is to start with an outline of the continent and to draw in the territory borders manually. Then break apart each object and designate them as separate territories. While doing so, you could also clean up the scribbles around some of the other borders, such as around the intersection of Seapor, South Cziton and West Bavalon.
- If you extend Capital District a bit more to the west, it will be obvious that it borders on Noveland and Kyro, so you won't need the yellow connecting lines.
- Finally, you might move the Vizier Islands farther northeast so you don't have to put the circle around them to show that they are a single territory.
Response by map creator qwed117 on 11/6/2014
Now that I finished the second version (which changes it greatly), I would like for you to rerate(?) my map
3 out of 3 people found this review helpful.
Review by

♦WzU♦ The Red Army on 7/8/2014.
Good effort for a first map! Keep going. You show great promise!
Response by map creator qwed117 on 7/9/2014
Thank you for your praise, it is the only thing that keeps mapmakers going
3 out of 4 people found this review helpful.
Review by

on 11/7/2014.
Good map, 3/5.
The reason I only give it 3 stars is mainly because of the awkward bonuses. I really like the idea of the open oceans though. However this really makes it hard to defend in play. There are a couple of other complaints and suggestions I have-
*Bonuses should be smaller in territory amount especially in this map, I think bonuses should not have more than 4 or 5 territories.
*Also, bonus values would be better off with the # of territories -1, because what you have now makes the smaller bonuses are indefinitely better.
*I like the idea of superbonuses. But why not have a small "north islands" bonus? Now they're only worth for the "Arctic Province" bonus.
*Territory borders are a bit weird.
*Lastly, Portokit (southern Elegia) look like it connects to the ocean but it doesn't.
Sorry if my rating is harsh, and don't get me wrong- this is great for a 1st map. I just wanted to give as much tips as possible. Good work! Can't wait to see more.
Response by map creator qwed117 on 12/23/2014
1)I made my territories, then the bonuses. That means that my territories had...problems aligning, so I was pretty much forced into having awkward bonuses.
2)I appreciate your suggestion on this point, I will change it later to match up.
3)I was going to, I simply forgot to. I plan on adding that soon
4)I still can't do much there. I simply am not that good at map making. I still have to get into Inkscape and discover it
5)My fault (again)

All in all, I will add most of your suggestions in. I should probably make the map have no ocean, and just add a boat or shipping lanes. The oceans change the game greatly, fear becomes a major role. You don't know where the next person will strike. You are left exposed.
EDIT:
Portokit is now touching the ocean. On a side note, I'm working on a new chapter of Qwedlandian cartography, expecting ~400 territories. I still am fully unsure
1 out of 2 people found this review helpful.
Review by