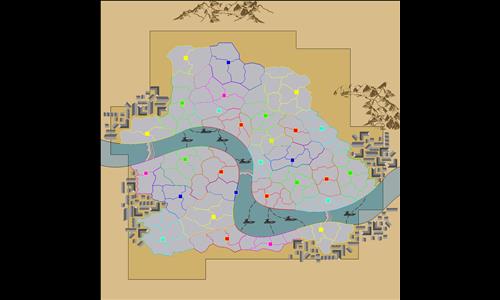 on 5/26/2015.
Visually appealing map. The borders are clear and connections are well-drawn. There are a variety of different sizes of bonus regions, making gameplay variable and interesting. As you're probably aware, the major issue with this map is the isolation of its southeastern portion. Another river connection or two between the Yin region and Mengzhanjiyi or Shigaoceng would alleviate this issue. One could say the same about the southwestern section of the map - that it can be held with only 4 territories in defense - but I think it likely that a player who controlled the entire southwest would already be steamrolling to victory.
Response by map creator MrOobling on 5/31/2015
The problem in the south-east has been fixed with extra connections added and an extra territory added to the furthest south-east bonus.
2 out of 2 people found this review helpful.
Review by blob

on 6/1/2015.
Pretty fun. Not sure if it's possible or easy to win in any way other than grabbing the lower left part of the map.
0 out of 0 people found this review helpful.
Review by Gustave II

on 1/15/2016.
Very flexible map. Able to be used on a plethora of different templates. Has a number of choke points great for 1v1 and 2v2. 5 Stars!
0 out of 0 people found this review helpful.
Review by