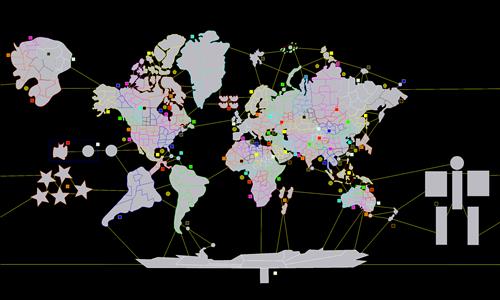 Parallel Earth is a map of the Earth, but in a parallel universe, where everything is the same, but just a bit different. Changes include; some name changes to places in Anartica, Greenland is now called Cyanland, the South Pole is taken literally, there are now 3 Madagascars, a new group of islands have formed to the west of South America, there's a big stickman to the east of New Zealand, there are now 4 Icelands, there is a new island to the west of Alaska, Japan is now a different shape and someone has opened a portal to hell.

Also, I've included some super-bonus areas, but valued them all at 0 armies per turn, so that anyone who uses this map can choose to include them, if they would like to.

on 3/15/2014.
It's not often that a map makes me laugh. Nicely done. And pretty good for gameplay, as well. While humorous, the extra territories keep you on your toes. I was focused on Asia and completely forgot about Blob Island. Pay attention, gamers!
8 out of 8 people found this review helpful.
Review by

LOL
0 out of 0 people found this review helpful.