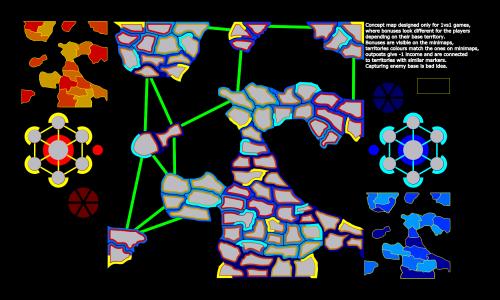 This is just small, conceptional map designed for 1vs1.

The main idea was to make the map look different for players.

In order to make the map differ for players, I decided to introduce a "Base" territory "outside" the map, which belongs to all the bonuses visible on the map itself. Both players have 1 base, and there are 2 different sets of bonuses. This mean that once a player lose his base, he lose all the bonuses too.

Each base connect to 6 outposts, each connect to 2 territories on the map with similar markers. They are introduced mainly to lower repeatability of the map.

Bonuses can be traced with the use of the minimap, or the territories each having both red and blue borders.

As I said in the beginning, this is just a concept map, I would like to get some feedback on the way this idea is carried out. Mainly about the minimaps, borders, and connection indicators.

I know it's not as pretty as it could be, it was made as a warm up map, with bigger map that use similar concept in mind.

on 7/20/2015.
Very, very, very cool. I've been thinking for a long time about the best way to create a "protect your base at all costs" map and this gives me some great ideas I would never have thought of. Wow.

The idea here is brilliant, but gameplay is unnecessarily complicated by the artwork. After wrapping my head around the concept, it was still very difficult because each outpost connects to 2 other territories without any visual linkage between them. Giving us some apparent referent would be a big help. For example, Red Outpost 1 connects to Tana and Ette. Consider giving those three territories a similar outline pattern - such as a red-yellow-red band - that is unique to them. Red Outpost 2 (connects to Lonel and Mishi) could have a red-pink-red band. And so on.

You might consider giving a bonus for each of the enemy's outposts a player holds - maybe 2 for Blue Base and Red Outpost 6, for example. This will give players more of an incentive to defend their outposts and to take the other player's.
Response by map creator

Rabbit on 7/20/2015
"without any visual linkage between them"
Well, there is a link, inclination of the yellow / light blue addition match the ones on the outposts - aka red outpost 5 have lower half marked with yellow, same like Infi and Asanel. Adding more colours seemed just as messy when I tried it, but maybe I used wrong colour palette there.

And as for bonus for enemy outposts, I don't know why I did not think of that. I'm going to add that when I can.

Thanks for the feedback :)
4 out of 4 people found this review helpful.
Review by Trevor Monreal on 7/22/2015.
Base idea is too flawed. Lost all my armies after winning most of map.
Response by map creator

Rabbit on 7/22/2015
Well, without huge negative bonus for both bases it's pretty much run for the opponent base. Even if it was lower, like -20 armies, once players have more income it's again way more efficient to beat enemy by capturing his base, rather than crush his bonuses. Yes, it makes winning harder, elimination may take very long, but decent players should realise when they can't win anymore and surr.

Actually, I think I may decrease that bonus to like -25, this way once you are clearly dominant you may take it suffering only 20 income (you get 5 for opponent base).
0 out of 0 people found this review helpful.
Review by cyingy on 7/22/2015.
only map I have seen where it is possible to end in a draw or lose on the verge of victory.
Response by map creator

Rabbit on 7/22/2015
Yes, that's similar to what Trevor Monreal said. I think I will decrease the minus to -25, still make it bad idea to attack bas, but may speed up things if your opponent don't surrender.
0 out of 0 people found this review helpful.
Review by Andalorium on 2/18/2017.
It took till the last two turns for me to figure out your coloring system, though once I figured it out it made so much sense so my suggestion is use symbols in the territories to designate going to the outposts, and have the colors designate the bonuses connections.
0 out of 0 people found this review helpful.