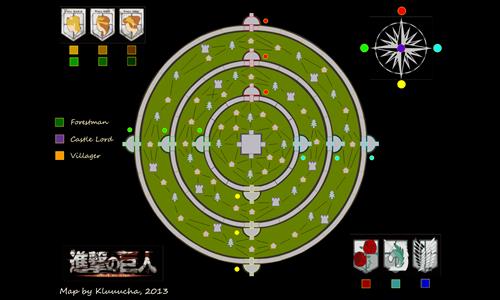 on 12/10/2013.
Very creative. This map keeps you on your toes with a multitude of attack path possibilities. You might give some thought to making the central castle have a bonus of its own - right now it is not a very valuable piece of real estate.
8 out of 8 people found this review helpful.
Review by

Also, since you have to get all forests and all villages and all castles to get the respective bonus, the one getting one already has more or less everything under his control (since he does need to have owned at least one gate o each wall to skip from one to the next). It might be an idea to have bonuses for the three concentric green areas (e.g. Major of Sina, major of Rose, Major of Maria). you can keep them small (e.g. 5,10,15), since from a militaric point of view they are not relevant, but they form the backbone of economy, and that pays taxes for the armies and wall....

But I like this map. Also as it is.
5*
4 out of 4 people found this review helpful.
Review by [REGL] Firehawk

on 12/12/2013.
Interesting twist on a commonly used lottery map.
3 out of 3 people found this review helpful.
Review by [REGL] Pooh

Also, the all forests/castles/houses are impossible to get.

EDIT:
I mean, look at the center circle where there are connecting lines and actual territory connections.

As to the large bonuses, they are impossible to get because they are all spread through the entire map instead of localized. If you already control the whole map enough to reach all of the territories in the bonus, then you already won.
Response by map creator Kluuucha on 12/12/2013
In my opinion connections are not as good as I planned, but it's still ok. In subject of location bonuses, there's one think to know. All bigger bonuses are strategy zones, so they aren't easy to earn and, that's the point, hold in possesing. Good player should keep his eye on enemy, or he'll get possibility to win by, fe., getting all forests. It's my first map, so it mustn't be Great and Glorious, but for me it's the best I made (Huh, that joke...). But thanks anyway :)