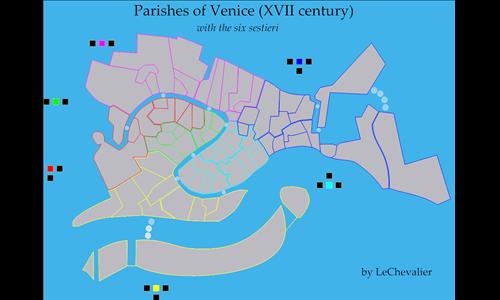 Parishes of XVII century Venice, with the six sestieri. By LeChevalier.

on 11/7/2013.
This map is interesting and entertaining. Thank you for taking the time to make the water blue instead of leaving it black like so many mapmakers. It's just far more pleasing to the eye.

The reason I gave 4 (and not 5) stars is that I feel that the map heavily favors players who start in Castello. It is too isolated and easy to defend. The more central parishes, however, exchange hands frequently. Perhaps consider connecting San Giorgio Maggiore to one of the territories in Castello.