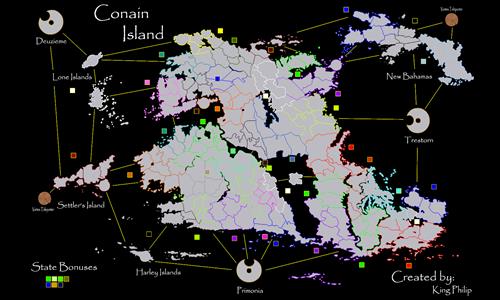 Once, the planet "Conain" was a thriving place with a lot of large islands and wide dry lands. A bright creature started to evolve, calling themselves "Gon-gon". 20000 years past and the creature had become highly evolved, with tecnology far better than we have today. But they faced a major problem. The massive ices of the poles started to melt. They couldn't stop it, so they built huge floating cities made of a metal which doesn't exist on earth. 3600 earthyears before today, "Conain" had only one remaining island.
At exactly this point of time, a group of aliens from another planet came from the sky and landed on this island. They called themselves "humans" and told the Gon-gons they came from a planet called "Tellus". They were the refugees of the mighty people of Atlantis. 4000 years later, another spaceship came in orbit. This was the ship of the remaining people of earth. The earth had been destroyed by a meteor. This is the story of the humans, trying to reestablish on the foreign planet.

Thank You!
3 out of 3 people found this review helpful.
Review by Nathan

on 10/23/2013.
Fun story and concept. I like the map design, as well. My criticism lies in the size of the bonus areas. Bonus areas of 10 territories makes for a slow game and one in which the AI is terrible. It simply cannot control and hold a bonus region. I expect that this map will make for a slow multiplayer game, as well.

Beyond that, the bonuses themselves are relatively small, generally offering between a 1:3 or 1:4 army-territory ratio. IMHO anything below 1:2 deadens gameplay; I prefer 3:5 or 2:3. These can be edited, of course, but the problem of taking and defending the large bonus regions themselves remains.