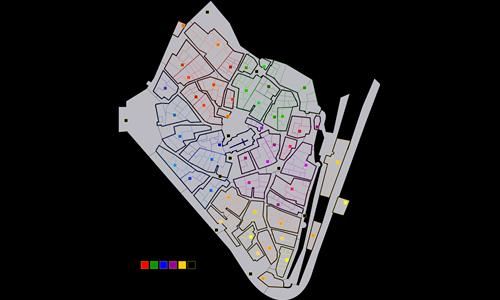 Puycelci (or Puycelsi) is a commune in the Tarn department in southern France.
The village lies in the western part of the commune, high above the right bank of the Vère, which flows northwestward through the commune.

The village was founded in the 10th century by Benedictine Monks from the Aurillac Abbey, in a location close to the ancient prehistoric site.
The first castle was dismantled after the Treaty of Meaux-Paris, in 1229, but the village remained a stronghold. Though it was besieged several times in the 13th and 14th century, it was reportedly never taken by force.
Until the First World War, the village was quite prosperous, with a population of nearly 2,000 in 1830. Almost abandoned in the 1950s, it was since then restored by its inhabitants and is now listed among the “Most Beautiful Villages of France”.

Well balanced for a map of a real city. I find the bonuses high, but then the territories are open to attacks. Roads are not easy to defend, while the quarters give high bonuses but have a lot of borders (and need the roads to defend as choke points).
3 out of 3 people found this review helpful.
Review by Nathan

on 10/16/2013.
Great map. I love maps of French villages that feature long roads. Very nicely done!
2 out of 2 people found this review helpful.
Review by