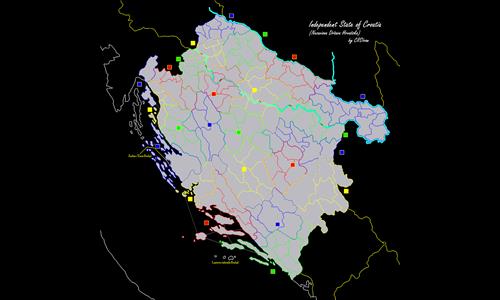 Independent State of Croatia was a country that existed during the WW2, from 1941 to 1945. Croats were very happy that they had their own country after exactly 843 years (in 1102 Kingdom of Croatia joined Hungarian-Croatian Commonwealth) of dependency. However, this country is not remembered by good that brought to Croats (independency), but by bad things (killing Serbs, Jews and Roma people in concentrational camps and the fact that there was no democracy, but dictatorship - Ustaša organisation was the only one that could be leader of Croatia, and the dictator of Croatia was Ustaša leader, Ante Pavelić). Infact, Independent State of Croatia didn't have full independence - it was a puppet state of Axis.
I reccomend strategic 1v1 settings for this map.

1.1 Reduced income of some bonuses

on 9/27/2013.
The need for bridges to cross the river adds an extra element to gameplay here. Nicely done.
Response by map creator