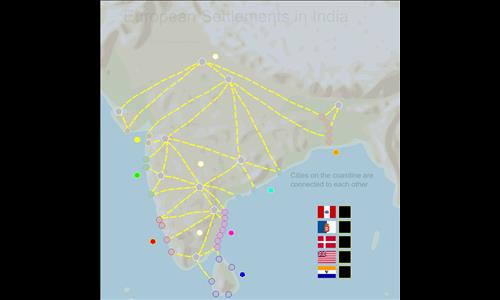 A map showing the European Settlements in India (year :1739)

on 9/9/2013.
This map has great potential, but right now success playing on it is entirely dependent on starting position. I might recommend giving a bonus for each major city a player holds. The other bonuses you have now are well-balanced, but anyone able to take control of a chain of cities (e.g., Ganges or Southeastern bonus areas) or Ceylon can camp on those territories.

Also, there should be a line to between Agra and Hughli to reflect that they do, in fact, connect.
Response by map creator

Belgian Gentleman on 11/16/2014
You are free to change the reward number of a bonus.

Also thanks for noticing the overidden link.
The connection between Agra and Hughli is now fixed in Version 1.3
2 out of 2 people found this review helpful.
Review by graze on 9/9/2013.
Wonderful idea.

But, I can not see the Flag Bonus well.
I think circles for territories are TOO small.

Except that, it's great.