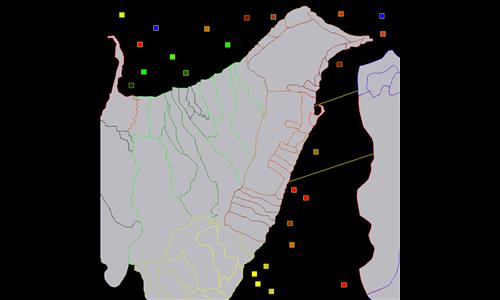 on 9/9/2013.
The map is visually attractive. The large territories mesh (potentially) well with the large number of surrounding small ones.

However, the major flaw in this map lies in the bonus territories. The two Zona areas (Nord and Sud) contain 12 territories - all pretty much in linear arrangement - and offer only 6 armies each. They are bordered by large territories that lie adjacent to virtually every one of their constituent territories (Castanea... and Dinnammare..., respectively). These two factors make them virtually impossible to capture early in the game and offer far too little in the way of reward if you do capture them.

So the bonuses are not only imbalanced (which a player can fix in custom settings), but they are poorly sized so that depending on starting location, some players could capture a bonus on their first turn while others may not even be able to reach all the territories in their bonus areas by the third or fourth turn. This greatly diminishes gameplay and player enjoyment of the map.
Response by map creator kykkos on 9/9/2013
How would you change bonuses?
1 out of 1 person found this review helpful.
Review by Captain Carrot on 9/10/2013.
Awkward topology. Difficult map
0 out of 0 people found this review helpful.