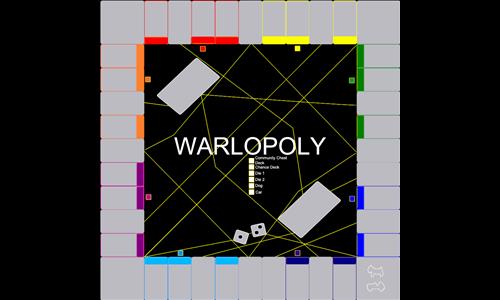 CROivan on 9/14/2013.
If you put negative income for Luxury tax and Income Tax, it would be more like Monopoly. Other that that, I really like the concept of the map so I'll give it 5/5.
7 out of 7 people found this review helpful.
Review by Nathan

on 9/13/2013.
Fun and nostalgic. There are enough connections that gameplay is non-linear and not simply a war of attrition.

I was disappointed to see that certain areas lacked bonuses, e.g., the railroads, the utilities, the chance squares and the community chest squares. I think an additional territory set in the middle of the map that linked only to Free Parking would be neat, especially if it conferred a fairly-large sized bonus and began the game occupied by a large number of neutral armies. Additionally, Jail should very definitely have a negative army bonus, as should Income Tax and Luxury Tax.

If you really want to get tricky, I could see adding houses and hotels in the following manner - each territory in a color bonus would connect to House #1, which would connect to House #2 and so on, up through the 4th House and a Hotel. Each house territory would grant one bonus army, just as each successive house in monopoly grants additional income when players land on it.
Response by map creator [PIP] Parrot on 9/14/2013
The reason I decided not to give bonuses to railroads/etc. is because they already have value in that they allow linking to other areas. I figured giving them an armies bonus would have made things a little unbalanced.

The Chance and Community Chest squares allow access to the decks, which do give you a 1 army advantage. I felt that the decks were also a little vulnerable because they have 3 openings from which to attack from, so I felt like that balanced everything out.

I considered giving squares like Jail a negative bonus. That would certainly be in keeping with the spirit of the map. The thing about it is, though, that I feel like in Warlight a negative bonus should come with some other benefit such as a positional advantage, otherwise people would naturally avoid that square if they had another option.

I didn't feel like the Jail or Tax squares had enough of an advantage to them to make a negative bonus worthwhile.

First of all, the ordered layout and multiple connections make for a satisfyingly fast game. I like to play 1v1, starting out with 1 territory each. Even so it's usually not long before you run into the other player.

Second, all the cris-crossing links between territories gives you plenty of options, making it harder for your opponent to box you in. You always have options.

Third, the way the coloured bonuses are separated means that your starting spot is much less of a factor. You won't lose a game because you started off in a bad location.

Finally, and perhaps most importantly, the map is fun and nostalgic. It's a whole new way to own Park Place and Boardwalk, or to take a ride on the Reading Railroad.

Try it out! I think you'll like it.
4 out of 5 people found this review helpful.
Review by