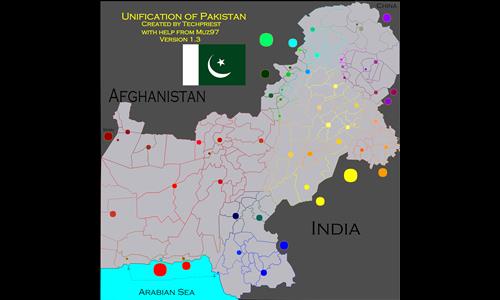 A country of southern Asia. Pakistan was the home of the prehistoric Indus Valley civilization. Throughout the lands and time, the country stands with numerous rulers and powers constantly being divided and weakened with each rule. However, there is growing powers among Pakistan, if Pakistan are to be united and become an independent nation, only one may prevail and do such thing... whereas other countries are also in require of unificiation only a worthy leader may claim to reunite it.

on 9/3/2013.
Lots of great places to start on this one. Get hold of the North, if you can. Another note to consider - do not make green your color on this map. I did and all of my territories blended in with the bordering countries, making things very confusing at first.
Response by map creator Techpriest on 9/21/2013
Background color is now grey as it looks more scenic in my perspective and less people use grey as their territory color.
3 out of 3 people found this review helpful.
Review by